Within the scope of FSMA’s Produce Safety Rule, produce is defined as any fruit or vegetable (including mixes of
intact fruits and vegetables) and includes mushrooms, sprouts (irrespective of seed source), peanuts, tree nuts and
herbs.

Under the Produce Safety Rule produce can be classified as:

A) Covered Produce
Produce that is considered a raw agricultural commodity (RAC) and that is grown domestically or that is imported
or offered for import in any State or territory of the United States, the District of Columbia, or the Commonwealth of
Puerto Rico is considered “covered produce” – meaning that its covered by FSMA’s Produce Safety Rule.

A raw agricultural commodity (RAC) is any food in its raw or natural state, including all fruits that are washed,
colored, or otherwise treated in their unpeeled natural form prior to marketing.

The following are examples of covered produce (Note: this is a non-exhaustive list. Just because you may not find a produce on this list, it may still be covered):

(2) Mixes of intact fruits and vegetables (such as fruit baskets).

2. Farms that grow produce only for personal consumption or very limited distribution may also be exempt from the Produce Safety Rule.

3. Produce that is not a raw agricultural commodity.

Farms must disclose in documents accompanying the produce, in accordance with the practice of the trade, that the
food is “not processed to adequately reduce the presence of microorganisms of public health significance”; and must
either:

(i) Annually obtain written assurance from the customer that performs the commercial processing that the
customer has established and is following procedures that adequately reduce the presence of organisms of public
health significance or
(ii) Annually obtain written assurance from your customer that an entity in the distribution chain subsequent to
the customer will perform commercial processing as required by the Rule.

For more information on this topic: See Subpart A- General Provisions of the Produce Safety Rule, Sections 112.1 and
112.2.

Taro growers must provide certain disclosures and obtain certain written assurances to be eligible for this exemption. Click on Taro_PSR_Exemption to access a downloadable fact sheet of the more thorough explanation below: 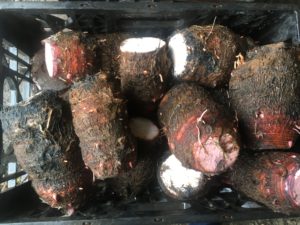 Note: On January 5, 2018, FDA issued a guidance document in which it stated its intention to initiate a rulemaking related to written assurances. To provide sufficient time to pursue that rulemaking, in the guidance FDA also stated its intention to exercise enforcement discretion with regard to the written assurance requirements in the Produce Safety Rule (and three other FSMA rules), until completion of that rulemaking process. This means that taro growers still need to disclose to customers that their taro are not processed to adequately reduce the presence of microorganisms of public health significance; but FDA does not intend to enforce the requirement for taro growers to obtain written assurances from their customers. However, those customers (and other customers thereafter) will still be required to comply with all other applicable requirements in federal and/or state and local laws, including the prohibition against the introduction of adulterated food into interstate commerce.