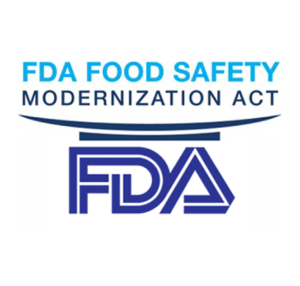 FSMA is the most sweeping reform of food safety laws in over 70 years. Signed January 4, 2011, by President Obama, FSMA aims to create an integrated food safety system and improve the quality of food products to the public by reducing foodborne illness. It aims to ensure the U.S. food supply is safe by shifting the focus from responding to contamination to preventing it.

On November 27, 2015, the FDA published the final rule for Produce Safety.

The seven major FSMA regulations are the:

All the categories of the Produce Safety Rule listed above (Worker Health and Hygiene, Agricultural Water, Biological Soil Amendments, Domesticated and Wild Animals, Equipment, Tools and Buildings) have been found to be potential sources of contamination of covered produce from previous outbreaks. Outbreaks of what? There are 3 main Microorganisms of Public Health Concern, E. coli, Listeria and Salmonella. All are bacterial in nature, smaller than what can be seen with the naked eye, and can make you sick

Escherichia (E) coli – Naturally is found in your intestine, in those of animals, and in surrounding water and soil. While most live and go about their daily lives without much harm to you, some strains are pathogenic and can cause, diarrhea, UTI, respiratory illness, pneumonia, and kidney failure. The greatest concern for food outbreaks is O157:H7, a shiga toxin-producing E.coli that can lead to the more severe symptoms.

Listeria monocytogenes – Naturally is found in soil, water, and animal digestive tracts. This bacteria can survive and multiply even when refrigerated, making it a real threat in air conditioning drips, standing water, and sprout production. Infection with the bacteria (a disease called listeriosis) can result in fever, muscle aches, nausea, vomiting and diarrhea and potentially death.

Salmonella – Naturally is found in the intestines of animals or infected humans and, while often associated with eggs and other meat based outbreaks, contamination on produce can also occur. Infection with Salmonella can result in diarrhea, fever, abdominal cramps, and bloody stool.

For those farms not exempt from the Produce Safety Rule, there are different regulatory compliance dates depending on the provision and the size of the farm’s business.

1 According to the Proposed Rule issued on 9/13/17, Compliance dates for Subpart E, Agricultural Water, allow an additional four years. This subpart is still being debated at the congressional level and thus no pre-harvest water requirements are being imposed currently.

Compliance dates for covered activities, except for those involving sprouts are:

Compliance dates for the water quality standards, have been extended.  The FDA is exploring alternative standards for the pre-harvest agricultural water requirements established by FSMA after receiving feedback from stakeholders.